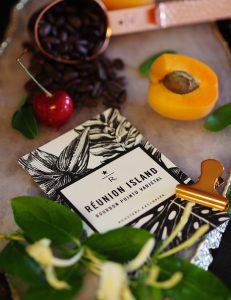 Every once in a while a coffee just captures me. It swoops in out of nowhere, and perfectly occupies a space in my heart. I heard about this new coffee at the Seattle roastery and was intrigued; Réunion Island Bourbon Pointu Varietal. There was little to no information about it, and it was expensive and very limited. As luck would have it, my coffee angel, Melody, sent me some. It sat on my desk, and I would just stare at it thinking, what am I going to do with you?.

That same day, I went on a walk with my friend. We walked along the trail behind my house, the trail I used to explore as a child. Along the fencing, was a huge bush of honeysuckle and jasmine. Suddenly, a huge wave of memories hit me. I carried that feeling and those scents home with me.

I came home inspired, filled with nostalgia, and I knew I wanted to do something to pay respect to the love and lore of Réunion Island.

One of the coffees widely associated with Brazil is Bourbon. Bourbon coffee was first produced on an island of the coast of Madagascar known as Bourbon (now called Réunion). It was later taken by the French to mainland Africa and to Latin America. It was only in 1727 that the first coffee bush was planted in Brazil. It is now one of the most popular coffees grown worldwide

The legend is that while stationed in Brazil Lieutenant Colonel Francisco de Melo Palheta traveled to French Guiana. The King of Portugal had dispatched him to help settle a land dispute between the French and Dutch colonies. Melo Palheta followed his orders but also set his sights on smuggling out one of the coveted coffee trees that the French had brought to the region from the island of Bourbon.

When Francisco arrived in the city of Cayenne he met the Governor’s wife Madame D’Orvilliers. The two began a love affair that culminated in the French Lady presenting him with a bouquet of flowers at the closing banquet. Much to the dismay of the French the bouquet secretly contained a Bourbon tree seedling.

Francisco de Melo Palheta brought the tree back to Brazil and it became the progenitor of the country’s coffee industry. This expansion helped spread coffee and allowed it to change from a drink for the elite to a drink for all people. This fueled the worlds love for coffee and over time transformed Brazil into the largest coffee producing country in the world. 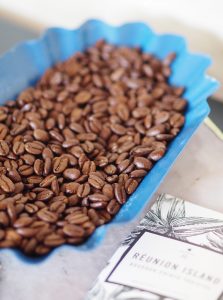 Réunion Island Bourbon Pointu is a washed light bodied coffee with a medium acidity. Delicate, fruity floral aromas with bright cherry and apricot notes. The roast definitely accentuates the acidity and brings the fruit and floral notes to the forefront.

I really wanted to honor the origin of this coffee, so I began by researching traditional recipes from Réunion Island. I quickly found a recipe for a banana cake, which didn’t have the flavor profile I was looking for, but it sounded so delicious. Then I thought.. why not a play on a pineapple upside down cake?

upside down apricot and cherry cake 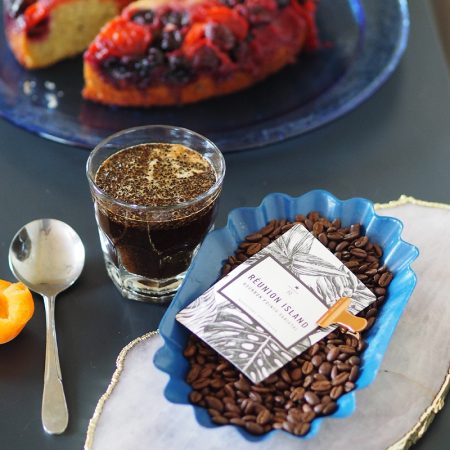 Save Print
Cook time
40 mins
Total time
40 mins
Author: Jocelyn Freeman
Ingredients
Instructions
Notes
This cake can easily be made vegan! Just swap out the eggs and the butter for plant based options 🙂
3.5.3251
This coffee is only available at the Starbucks Reserve Roastery in Seattle. I am told only a few hundred pounds were purchased, and this maybe be the only opportunity to try it. If you are a coffee nerd, you have heard of this varietal, but probably never thought in a million years you’d get to try it. Thank you to the coffee buyers at Starbucks for this, and of course, Melody, for sending it to me.

The word coffee originates from the Arabic word ‘qahhwat al-bun’ which was then shortened to ‘qahwa’. The Turkish called it ‘kahve’ after which the Dutch made it ‘koffie’, until it was finally translated to ‘coffee’ in English.